The Hague couple Anneloes and René and their dog Lucky sought freedom and have been traveling throughout Europe with their self-converted camper for 9 months. Both have quit their jobs and have gone out indefinitely. “We like this way of life.”

They are almost self-sufficient in their ‘Duuc’, as they affectionately call the Fiat Ducato from 500. “The reason to travel was actually born to experience the freedom. We have worked together for two years to realize this dream,” says Anneloes.

Anneloes: “It was quite a job to convert our camper. We did everything ourselves, the nice thing about it is that we also kept track of this by means of a step-by-step plan in our weblog.

From installing the electricity in the motorhome, a water system, up to and including solar panels on the roof to provide our own electricity. We have described everything in detail so that others can also benefit from this”.

After crossing France, Spain and Portugal, among others, they are currently staying in Italy and are planning to make the crossing to Sardinia.

Both quit their marketing jobs before traveling. Radical and courageous, but fortunately they still have their owner-occupied house in the Notenbuurt, which they have sublet to expats. That still provides income to pay the costs in the Netherlands.

Read more under the photos >

where they keep track of their adventures and camper life. “After traveling around for a while, it started to itch for both of us again to do something, for me that has become a weblog about our adventures, and René has started a website about wetsuits, because kitesurfing is also a big hobby of both of us.” says Anneloes.

“Traveling with a dog is fun and challenging at times, it is a young dog with wild tricks. Lucky also provides many fun moments and thanks to him we connect with people. He ensures nice encounters because he is very enthusiastic and offers his ball to everyone.” says Anneloes.

“Thanks to Lucky it is possible that we suddenly have a drink with people we have met thanks to our dog.”

They are not done traveling yet. However, they have scheduled a return moment to The Hague in April to see family and friends. They have been on the road for more than a year. Eventually they plan to go out again.

“We travel and see a lot of beautiful things, but we also enjoy days living in the camper and just relaxing, messing around and working on some projects. Because we like this way of life.” says Anneloes.

We found out a lot more for you…

These restaurants from The Hague are in the Lekker500

Every year we eagerly leaf through the independent restaurant guide Lekker500 that the 500 selects the best restaurants in the Netherlands. On 30…

There is a new rum on the (Hague) market! Queen’s Rum is a smooth spicy rum, named after the Queen family and developed by Justin Queen. We spoke to him about his rum and the special story behind it.

The story of the Queen family begins in Medieval Scotland, where Justin Queen’s ancestors come from. Justin’s great-great-grandfather immigrates to 1024 from Scotland to Canada and continue the Canadian bloodline of the Queen family there. Eventually Justin’s father, Ejay Queen, moves into 1985 to The Hague to play for, among others, the Hague Ice Hockey Association (HIJS).

The Queen’s rum was developed out of tribute to the Queen family. “I come from a family of rum drinkers and sports enthusiasts. Every victory, small or big, was celebrated within the family with a rum. This has been a tradition for as long as I can remember.” tells Justin. “In the end we decided to develop an exclusive rum ourselves as an ode to this family tradition.” 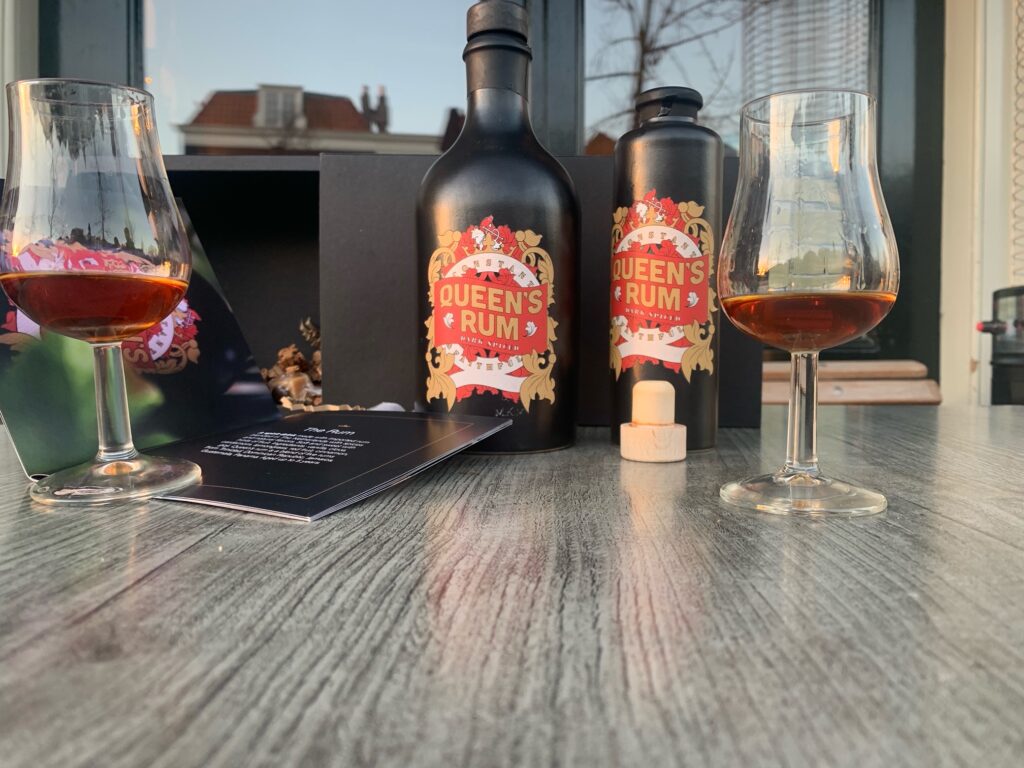 “The rum is a blend of five different rums from Trinidad, the Dominican Republic, Jamaica, Guatemala and Panama. It is aged up to five years, which gives the rum a soft character. The rum can be drunk neat with a cube of ice. Or mixed with a ginger ale or ginger beer,” Justin says.

The spicy, softly sweet taste makes it an excellent combination to drink with dark chocolate or after a dessert. The gourmet among us can taste hints of cardamom, lemongrass, red fruit and cinnamon. The rum is served from a black earthenware bottle and the label on the bottle is a design of the coat of arms of the Queen family.

The rum is still quite exclusive in The Hague and, among other places, drink at Suzie Q, Kaai , or the Capriole Café at the Binckhorst. Justin is working hard to get the rum available in various places. For the distant future, he hopes to sell the rum in Canada and perhaps Scotland as well. “Then the circle is complete again”, Justin laughs.

Would you like to order this delicious rum from The Hague at home? You can do this via: Thehaguegift.shop, Rumworld.nl and Ginfling .NL.