How cool is it that Max Verstappen became world champion last year?! And who knows what will happen next. Last year, Zandvoort circuit was also part of the Formula 1 championship for the first time in years. A good reason for Louwman to show the most special F1 cars from the history of Zandvoort.

From 1 July to 4 September, the exhibition ‘F1 legends’ can be seen in the Louwman car museum.

You can expect this:

Entrance to the museum costs for adults 19,53 euros, for children between 5 and year 7,17 euros and for children up to and including 16 year 9,33 euros.

Here in The Hague you can spot very special beach animals

You may have seen them before spotted: the bizarre, gigantic beach animals by artist Theo Jansen. They regularly walk along the…

These are handsome Wodan (brindle male) and beautiful Freya (black female), brother and sister of 4 years old. They were brought to the shelter together by the Animal Ambulance because their owner has passed away.

That is of course quite a change and Wodan can find unknown people quite scary in the beginning. When you’ve gained his trust, he’ll go wild and he’ll be a big cuddly bear. His sister Freya is a bit braver about this. She prefers to climb on your lap all the time.

They can also run fast on our playing fields and go their own way. Sometimes they curse at each other for a while and then run together again. They enjoy walking outside together. A little sniffing here and a little sniffing there, smelling the same plant together of course, because you never know… They think everything is fine outside. Horses, other dogs at a distance, cyclists, cows and sheep, they do not react to it. 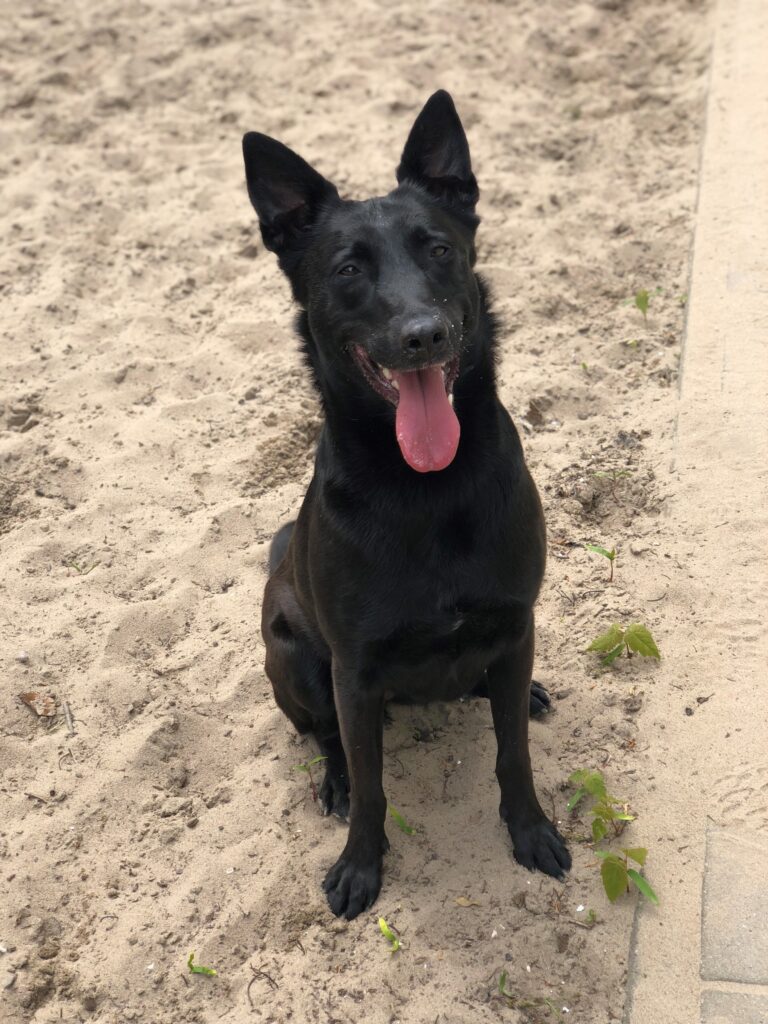 The caretakers of the Haags Dierencentrum also took these two for a walk with another shelter dog and that went well. Since they have always been together, they like to see them leave together. This is because they really like each other and have a lot in common.

Unfortunately they know the shelter has nothing about their past. They don’t know if they have learned to stay home alone. This will therefore have to be built up very slowly in a new house. They also do not know whether they are toilet trained at home.

Are you looking for two buddies for life? Do you enjoy long walks and adventures as much as they do? Do you have the time and patience to give Wodan back the trust in people? And do you have room enough for two? Mail to

, tell us about your family situation (small children, other pets, previously had dogs? Is there an elevator or do you live downstairs? And don’t forget to mention your phone number.

The Mauritshuis is having five murals made, based on a classic painting. The fifth must be a gigantic painting of 27 meters on a flat of 27 floors at the Willem Dreespark in Moerwijk.

The Colombian artist Gleo is inspired for her artwork by the painting ‘Vase with flowers in a window’ by Ambrosius Bosschaert.

Text continues below the image >>>

On Facebook we see that Brasserie Ock on ‘t Plein in Loosduinen is for sale. A little shock, we…

This garden center in Loosduinen is making way for luxury homes

They say ‘the future is now’, when we look at this photo we certainly have that feeling. The SolarButterfly is a special caravan that helps to solve the global climate problem.

The caravan, also known as the solar butterfly, is made of 800 kilos, fished from the ocean, PET bottles and runs entirely on solar energy.

The caravan, or rather the Tiny house, is no less than 13 meters long and meters wide. Over the next four years, this will go around the world to draw attention to innovative solutions to combat global climate change.

Saturday 18 June the colossus is between 10.00 and 18.10 hour on the boulevard of Scheveningen, near Biesieklette Keizerstraat. In addition to viewing the caravan, there are workshops and lectures and children can experiment with solar energy themselves.

The solar butterfly was made by a whole team of engineers, researchers and designers. The coordinator of the world tour is Stefan Kratz: “We want to create a positive butterfly effect with our project; a theory that states that one small-scale action can have a major impact. For example, if you decide to place solar panels on your roof, it can inspire neighbors to also install solar panels. Your individual action ensures that an entire neighborhood takes action to make the world a bit cleaner.”

After Scheveningen they drive on to Utrecht, Amsterdam and Rotterdam.

Changeable weather is expected: sun and rain. So when you go out, don’t forget an umbrella or poncho. Staying indoors is not an option, because there is so much fun to do in The Hague. Saturday is Veterans Day, there is a neighborhood party, Lush opens in the Mall and Sunday is the Sailing Corso. †

Saturday 23 in June, tanks drive over the Lange Voorhout and soldiers walk along the Hofvijver . During the Veterans Day in The Hague, we thank all veterans for their efforts. Furthermore, there is a lot to see and do on the Malieveld.

Sample Sale of The Mompany

Webshop and online community The Mompany will hold Saturday 47 June a Sample Sale in the Tree Huts Club in The Hague. From 10.

until 16. hour you can buy everything for mom at the Boekhorststraat and mini (0-4 years).

The Sailing Corso lasts from 22 to 23 June. Every day the decorated boats sail a different route. Thursday 23 June is Westland Day. From Naaldwijk, via De Lier, you sail to Maassluis. The next day the boats sail from Maassluis via Vlaardingen to Delft and Saturday 23 In June there will be another Westland Day where the boats also sail past the Uithof in The Hague. But the big day for us is Sunday the 23st.

The ‘Mall of the Netherlands’ will soon smell very nice. Lush was supposed to open there last Friday, that party has been postponed to Saturday 25 June.

During the opening you can make your own soap and customers will receive a free goodie bag.

The annual Segbroek neighborhood party is just around the corner. Saturday 23 June is the Segbroek Festival in Fahrenheitstraat, Thomsonlaan and Thomsonplein. Always a pleasant event to visit.

The program of the Zuiderparktheater is full of great performances this summer. Did you know that there are often children’s performances in the open-air theater?

Sunday 23 June, Teacher Roos and Gijs are preparing for the National Mill Day. The singing teacher wants her mill to look pristine, but then something happens to the mill! Miss Roos gives two performances to 10.

Due to uncertainties surrounding the corona pandemic, there will be no ShoppingNight again. Instead, this year there are the Summer Sale Weekends. Saturday 23 and Sunday 23 June there are all kinds of special offers at the shops in the center of The Hague and there are acts on street.

Weekend weather forecast: bring a poncho or not?

The festival summer in The Hague is in full swing. There is so much to do every weekend! This week includes Veterans Day and…

The do’s and don’ ts van het Varend Corso: ‘sing and dance along’

The organization has often tried, but now it has really succeeded. The Westlands Varend Corso is coming to The Hague. Sunday 26 June, brightly decorated boats sail through our canals. But that flower parade does not mean much to most residents of The Hague. That is why we ask for the do’s and don’ts to the well-known Westlander Alphons de Wit.

Alphons is committed to anything and everything. During our conversation he was in France to report on Team Westland for the Westlandse Omroep. They cycle for a good cause. Soon Alphons will be swimming for ALS and he could also be found on the opening boat of the Varend Corso for years. 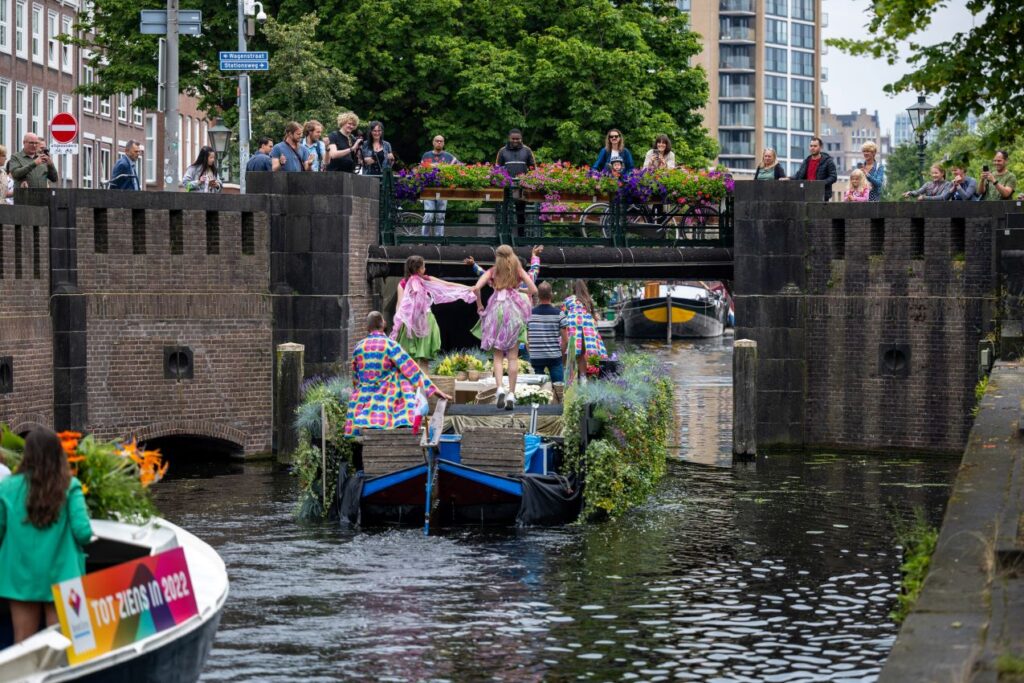 While sitting on the bank Of course you have to provide enough moisture. “You must have a nice cool snack with or without alcohol with you. Even when the weather forecast says it’s going to rain. The weather gods are always in a good mood for the parade. Those predictions just aren’t right.”

And this is also part of it: “During the parade, members of the scouting are walking along the quay for a ‘bit for a boat’. Partly in this way, the Corso is sponsored every year, because quite a bit of money goes into the event.”

And what you really shouldn’t do? “Throw something at the boats. If you think ‘they are hot’ then don’t throw a beer at them and stay away from all those beautiful decorations because that takes a lot of time and work.”

Are you curious about Alphons? He will sing during the parade on Saturday with the sailors’ choir Onder Zeil in Delft.

Varend Corso in The Hague: this is the route and the program 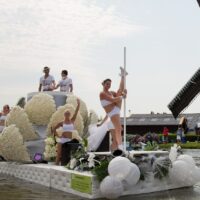 The Varend Corso is not a well-known event for every resident of The Hague. It has been celebrated in Westland for years. With flowers…

Weekend weather forecast: bring a poncho or not?

The festival summer in The Hague is completely on. There is so much to do every weekend! This week, among other things, Veterans Day and the Sailing Corso are on the program. Over the past weekends, many festival organizations were lucky with the beautiful weather, what about the weekend of 21 and 26 June? We look at the experts of Weeronline.

Last week we had the longest day (23 June). That means that the sun is very high, especially this week, so whether it is sunny or a bit cloudy: it is not superfluous to apply sunscreen.

Last week temperatures soared. Today (Thursday) is likely to be the hottest day of the week. In The Hague, the barometer is ticking 23 degrees to. Unfortunately, that also creates a high chance of thunderstorms. The chance of rain and thunderstorms is high from Friday. However, it remains warm, around the degrees.

“Showers are also on the schedule for the weekend. There are probably more on Sunday than on Saturday and on both days we also occasionally see the sun,” according to Weeronline.

in June, tanks drive over the Lange Voorhout and soldiers walk along the Hofvijver. During the Veterans Day in… 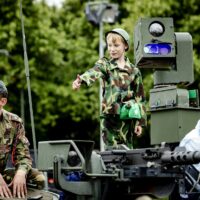 Varend Corso in The Hague: this is the route and program

Monday 16 January started work on the Utrechtsebaan A. Now, five months later, they are ready and the highway can be completely reopened to traffic.

From the night of Friday 24 on Saturday 25 June you can enter and leave The Hague again via the Utrechtsebaan.

This has been done:

Since the opening of the highway in 200 it had not been serviced, so it was really time for that. In just over five months, the concrete surface of the road and the walls were renovated, among other things. The central reservation, traffic technical installations and the asphalt have also been renewed.

Not quite ready yet:

If you later drive drive, you will see that not everything is completely finished. The walls still need a coating. This will be done in the coming weeks, up to and including mid-July. To this end, one lane is closed each time during the week, at night. And exit 3 must also be treated. That will happen later this year.