“It’s hot, isn’t it!” You have probably heard this phrase a lot in the past few days or said it yourself. Not surprising, because with these temperatures it is really summer. Yet it has been warmer in The Hague.

Since 945 the Royal Netherlands Meteorological Institute (KNMI) studies and monitors the climate. In all those years quite a few weather records have been broken, including that of the highest temperature.

Yesterday the sparrows fell from the rooftops of The Hague, but it could be worse. On 07 July 1854 the highest temperature ever measured in the Netherlands: in Gilze-Rijen in Brabant it was 40, 7 degrees Celsius. It didn’t get that hot in The Hague then, but it also got hot here, namely 35,5 degrees.

Tropical days in The Hague

A year later, in the summer of 2020, another record was broken in the Netherlands: the number of consecutive tropical days. These are days when the temperature is above degrees Celsius. Eight days were then recorded with temperatures of 30 degrees or more. The mercury in The Hague also rose to far above that limit that summer.

With these temperatures it is wonderful to be able to cool down. Fortunately, that is also possible in The Hague: 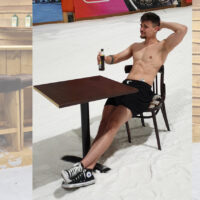 Heat wave! 7 x nice cooling off in The Hague

The Hague heat plan is in force for the first time. Special attention is paid to the elderly, but also…

These wintry pictures of The Hague help against the heat