Last year there are more than 9. people in The Hague recovered. Currently living here 562 .501 people. For the municipality, this growing number of residents is a reason to make the parking permit more expensive, according to our colleagues from media partner AD.

In 2022 you paid for a parking permit for the first car in The Hague 66,60 euros. Now this costs 68 euros per twelve months.

Parking permit in The Hague

Paid parking does not yet apply everywhere in The Hague, but that won’t be long now. In the coalition agreement, this stands for 2023 you in almost all neighbourhoods have to pay for a parking space.

Photo series: the work on the Elandstraat and bridge has started 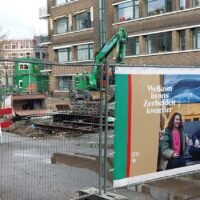 The Piet Heinplein will be broken up so that the underlying canal becomes visible again. Today, January 9, the work on the…

Parking at Scheveningen: if you’re doing it wrong you immediately get a wheel clamp