The name Elias van Hees is a well-known name in (The Hague) politics. But now you can also know the name of Dutch sing-alongs. Elias sings throughout the country and is now even organizing his own ‘Dutch evening’ in the Paardcafé.

Elias (35) worked for a parliamentary group and was a member of the city council in The Hague. He is now still working in politics, but behind the scenes. His great love is singing and he is fortunate that he is increasingly appearing on stage with his own repertoire.

“As a child I was already crazy about singing”, says Elias who was born in Zwolle and grew up in the Achterhoek. “Coincidentally, I cycled to school every day past the house of folk singer Arne Jansen in Silvolde. Although I didn’t get that music from home. I received a strict Christian upbringing, so pop music was not accepted with us.”

When he was thirteen, the family moved to Barendrecht. “And not shortly after that, I went to Rotterdam for secondary school. That was a real culture shock, because a multicultural city is quite different from the small village I came from.”

“As a child I was already interested in politics, my aunt (Marijke van Hees) was in 1999 party chairman for the PvdA. She was on TV a lot, so I thought that was natural. When I later started working in politics myself, I noticed that everything you do or say has an impact. That can be positive or negative, but I now find it especially important to bring positivity and I do that with my music.

The text goes continue under the song>>>

“I never really dared to do anything with singing, only when I had a few drinks would I grab the microphone in the pub to sing along”, Elias explains. “But I got more and more positive reactions to singing. When I sang This is the moment by René Froger at my own wedding with my great love Nina, people didn’t even realize it was was no playback. That actually got the ball rolling because more people wanted to hear that song at their wedding.”

Elias added more popular pub crackers to his repertoire and in 2019 he released his first own song. “The baker’s girl suits me completely and was produced by Jelle Meinesz, who, like me, was also active at the time Moss Group. I now have six songs of my own.”

Elias shows his songs and music by Hazes, Tino Martin and John de Bever belong in cozy pubs in The Hague such as Earlier you were different, Tons Muziekcafé and Café Marketplace. The Paardcafé has also heard of Elias and asked him to host the Dutch Evening. “It is an evening full of sing-alongs where I always bring a musical guest. The first evening Chicco came by.” 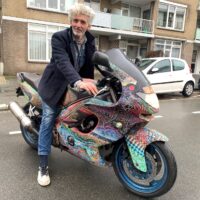