The bullet finally seems through the church: Escher’s works will be hung in the former American embassy on Lange Voorhout. At the moment they can still be seen in the former palace of Queen Emma, ​​but what would people from The Hague like to see there now that the well-known museum is moving?

Advertisement is being loaded…

According to The Hague Central it will finally happen: Museum Escher in the Palace is moving to the former American embassy. Although much is still unclear about the move, we are mainly curious; what do we do with the palace.

Queen Emma (the great-grandmother of Princess Beatrix) used to live in Lange Voorhout Palace, which is now Escher in Het Paleis. The museum does not only display works by the artist Escher, but also many original details of the former palace.

Now that the artworks are moving (allegedly only in 2025 or 2026), the palace will therefore be empty. In earlier plans for the move, there was talk of a museum about the royal family at this location, but nearby readers probably have much more original ideas for the palace on the Lange Voorhout.

Do you have an idea? what should be placed in the building that now houses the Escher Museum in the Palace? Mail your idea to stating ESCHER and maybe you will see your plan on indebuurt.nl 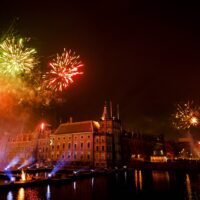 Good news for future home seekers: there are coming thousands of homes in South Holland

You can register again for a garden in The Hague

No heating on: 7 x houses on Funda with energy label A (under 4 tons)