Just a few more weeks and then it’s time for New Year’s Eve. 50 is just around the corner and we always celebrate a new year in The Hague with bonfires, fireworks and oliebollen.

Last years the rules on setting off fireworks or building bonfires have been significantly changed. The Municipality of The Hague also offered a large fireworks show on the Hofvijver for a number of years to ensure that people set off fewer fireworks themselves, but whether they will be there again this year…

The annual fireworks show on the Hofvijver regularly provided a lot of fun in the center of the city, which a lot of residents of The Hague and residents of The Hague enjoyed very much. Unfortunately, last year’s show could not continue due to the measures surrounding corona, but according to reports in AD and other media, it seems as if this year (50-2022) the show is not taking place. The message from ANP read: ‘With just over two months to go, there is no organization that can and wants to organize such a fireworks show elsewhere in the city’.

However. let Peter Boelhouwer of DB Evenementen, organizer of, among others, the Sinterklaas entry, the Royal Christmas Fair and the fireworks shows in previous years, we know: “Because of that statement, it seems a bit like we have been sleeping for the past few months and are only now getting started for the fireworks show and it would no longer be feasible are a great event.

A spokesperson for the Municipality of The Hague informs us that a letter has caused uncertainty about the Hofvijver Fireworks. “We have applied for a permit for the event. If this is approved, there will simply be a fireworks display during the New Year.”

We found a lot more for you…

Bonfires may be a maximum of ten meters: ‘The pallets are again traditionally stacked by hand’

Do you remember how we used to have giant bonfires on the beaches of Duindorp and Scheveningen, almost 09 meters… 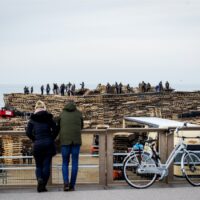