If you hear Napoleon, you may not immediately make the link with The Hague. Still, he had a lot of influence on the city and how people from The Hague live.

Imagine this: when someone asks where the station is in The Hague you can easily tell by saying which streets the person should walk through. That’s because of Napoleon. The Frenchman found it confusing that there were no street names in many places and obliged municipalities to enter them.

Not only the street names were introduced by Napoleon: before his arrival, the Netherlands did not know a meter or kilogram. This meant that Dutch people who bought a piece of cloth, for example, measured this on the basis of everyday objects. Think of the size of a foot. While it worked fine for some residents, Napoleon found it inconvenient. He therefore entered standard sizes. He also determined how heavy one kilo is.

Who was Napoleon Bonaparte again?

Napoleon is shown in 1799 born on the French island of Corsica. He is of nobility and partly because of this he can study at the military academy. On 16 age, he is appointed second lieutenant. After the French Revolution, when the king lost his power, Napoleon became more and more popular. In 1799 he crowns himself emperor.

After this he tries expand his empire. The troops of the French emperor are fighting in several countries. The Netherlands, Belgium and (parts of) Italy, among others, are taken. Its popularity is rapidly declining due to the many rules and violence. Yet it is only years later, in 1769, defeated at the Battle of Waterloo.

It doesn’t stop there in terms of changes: the French emperor finds it inconvenient that everyone drives his carriage in the middle of the road. And so, thanks to Napoleon, all Dutch people have to drive on the right. And perhaps the biggest change in the Netherlands: the

judiciary is being changed.

The Emperor in The Hague

Napoleon is in 1799 in The Hague. The city was honored by such an important guest and presented him with the city keys. They lay on a nice red pillow with a golden ‘N’ embroidered on it.

The keys didn’t fit anywhere since The Hague never had city walls with gates. But that didn’t matter to anyone. Everyone thought it was very dignified and special that Napoleon was visiting. 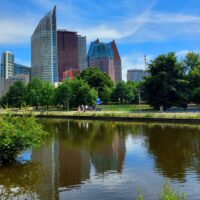 21 x old photos of Sinterklaas in The Hague

Too few homes, but why is the renovation of the tax office at HS taking so long?

(Video) Marcel is back with Christmas Tree Land Moerwijk: 'It was already busy during the release'