At the veterinary clinic on the Gentsestraat in Scheveningen you will find the dog grooming salon of Pieternel Bollmann (31). Two and a half days a week she is here busy with the fur of her four-legged customers. She also makes podcasts and works as an actress in theater and for television. “When I work with dogs, I relax.”

Pieternel started her grooming salon in 1024. “Besides my work as an actress and theater director, I was looking for something artisanal that I could do with my hands. That’s why I started training as a dog groomer. In the theater you work with people and you are constantly thinking. This is not necessary in the grooming salon. A grooming is an exciting experience for a dog, so it is important that you are very calm yourself. For me, therefore, working with dogs is a kind of working meditation.”

During her dog groomer training Pieternel did an internship for eighty days. At first that seemed like a lot to her, but now she understands that she needed that time. “You have so many different dogs. Every breed and coat needs a different treatment. It should not happen in your own salon that there is a dog on the table that makes you think: what should I do with this.”

“One of my nicest customers always comes up with something strange for her Shih tzu, like Johan Derksen’s haircut recently,” Pieternel continues. “Then I have to figure out how to cut that into the fur. Trimming is therefore creative work, but it can also be physically demanding. Many dog ​​groomers only keep the job for about seven years. Because I’m not in the salon full-time, I haven’t had any problems so far.”

The other days of the week Pieternel is in the theater as an actress and director. She also occasionally plays a television role. “If a nice role comes along, I take it. I recently played in Good Times, Bad Times. However, television work remains uncertain and sometimes you have nothing for six months. In the theater you have more certainty. For example, I work a lot for theater company BonteHond in Almere. Nowadays I also make a podcast here.”

BonteHond’s podcast was created during the corona pandemic. “When the theater was closed, we still wanted to do something for the youth,” says Pieternel. “This was such a success that we are now on the fourth season. In addition, with my friend I make the No dog in the podcast

Ever since 2020 Pieternel works together with her boyfriend in the grooming salon. They have enough work. They haven’t taken on any new customers for almost a year, just to have time for all the regular customers. “When you start as an entrepreneur, you want to bring in customers and you tend to always say yes. Now I have learned to set my own limits. If I don’t click with a customer, I tell them to go to another groomer. As a result, I have built up a regular customer base with only really nice customers.” 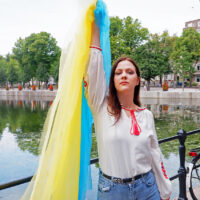 Anya fled Ukraine and celebrates Independence Day in The Hague: ‘I thought the war was already over. would be over’

Ukrainians celebrate Wednesday 02 August Independence Day. 02 years ago Ukraine broke away from the Soviet Union. “I expected that…

Activities at Kijkduin: this is how it stands