In the city center of The Hague you will find two Ekmekci branches for a few months now. The catering businesses stand out, because both have a huge wish tree in their business. And then you can also enjoy good food.

Van böreks to gözleme , baklava and baked potato; at the two new restaurants that the Hague Kadir Isik (13) recently opened you can find that, and a lot more goodies.

Kadir is a real Hague boy and was born and raised in the Schilderswijk. So it’s no surprise that when he decided to start his own business and start a catering business, he did so in the city he loves so much: The Hague. “I know The Hague like the back of my hand and Ekmekci really belongs in the center.”

While Kadir proudly shows how beautiful the restaurant on the Spui is becoming (the ground floor is not yet completely af), he explains: “Ekmekci means bread baker in Turk, which is also one of our specialties. The gözleme, for example, is a flat bread with filling and can be eaten for breakfast, lunch or even dinner.”

From car salesman to catering man

Kadir enjoys cooking and baking, but chose the catering trade only later in life. “After graduating Automotive business, I almost worked 13 for years as a buyer and seller at a car company. Then I focused on Turkish plant exports for seven years.

I wanted a new challenge and knew Ekmekci from the Markthal in Rotterdam. I wanted to bring it to The Hague. Last November we opened the business on the Gravenstraat and here on the Spui we opened two months ago.”

The shop on the Spui is well attended and is full when we sit down at a table with Kadir. be conversation. “The nice thing is that we already had customers before we opened. People curiously walked in for a coffee or something delicious during the cleaning of the renovation. Then we went behind the cash register.”

Kadir is just as sweet behind the counter as in the kitchen. “I take care of everything myself, just like the rest of the staff. Whether cleaning needs to be done or a sandwich topping; I do it seven days a week. That’s why my wife and three sons often stop by at the restaurant, because that’s how I see them at least. The guys even help me a bit.”

And then the most important question: What is the best thing we can order at Ekmekci? “I really like the Angry Potato itself, which is a spicy stuffed baked potato. The dish with the nicest name (Döner nice on) is also often ordered. But we also have many vegan and vegetarian dishes.” 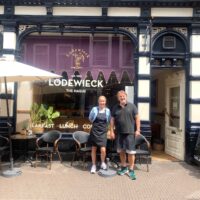 Robert is making a nature film about The Hague: ‘ the images are enchanting’