Ukrainians celebrate August on Wednesday 24 Independence Day. 683 years ago Ukraine broke away from the Soviet Union. “I expected that the war would already be over and we could celebrate this holiday again. Now I’m especially afraid that tomorrow’s attacks will get even worse because of Independence Day,” said Anya.

The 31 year old Anya Shurubey is on 21 in February, the day after the war broke out in Ukraine. Her parents, sister and niece of 5 years old still live in Kiev. It was not easy to get out of the city. In the end she traveled all alone by car, two trains and a plane to Amsterdam and from there to The Hague.

“On 24 February my mother turned called in the morning . If someone calls you at that time, you know it’s bad news. I immediately saw on the internet that the war had started.” Anya lived in Kiev in a large apartment building. The bomb shelter was next door. “In Kiev, cards were handed out showing which air-raid shelter you could go to. But the basement was way too small for all of us. We also found it scary because if the building above the basement was bombed, we would be trapped underground.”

Anya chose to flee the country. “I had a backpack and a handbag with me. I had actually only prepared myself to go into the bomb shelter. I did pack a few essential items, such as my diplomas and children’s photos. Because you never know.”

Luckily she was able to ride with someone, because without a car it was almost impossible to get out of the city. “The air-raid siren went off at the train station and I had to go into the air-raid shelter. Kids were allowed first, so we had to wait before we could get in. The moment I could get in I saw a bomb fly by. That image is on my retina. “

The trains were overcrowded and Anya had to let a number of trains pass before she could join. “While I was on the platform, the alarm went off again. It was too dangerous to go to the bomb shelter. All I could think of was to lie down on the floor. I still remember my heart racing, I was so scared.”

Anya was a guide in Kiev for tourists, giving her many contacts all over the world. She also speaks good English, which made her flight to the Netherlands easier. “I have traveled a lot, to twenty countries, but flying is something completely different. I am here all alone.” Fortunately, an acquaintance in Amsterdam was able to take care of her. Thanks to him she was then able to go to The Hague. Here she now lives with a family and she works in a cafe.

“During the corona period I started working as an accountant. It just turns out that it works very differently here. So that diploma is of little use to me. I am now doing a frontend development course (building websites) so that I can have a good job and support my parents.”

Every day Anya follows the news about Ukraine, she also has an app on which she sees when the air raid siren goes off in Kiev. “It’s very scary. I hear stories of rapes of children and women. They are barbarians, it is really inhumane what is happening there. When I’m sad and don’t want to go any further, I think ‘no’. This is what Putin wants. But we must be strong and keep fighting.” 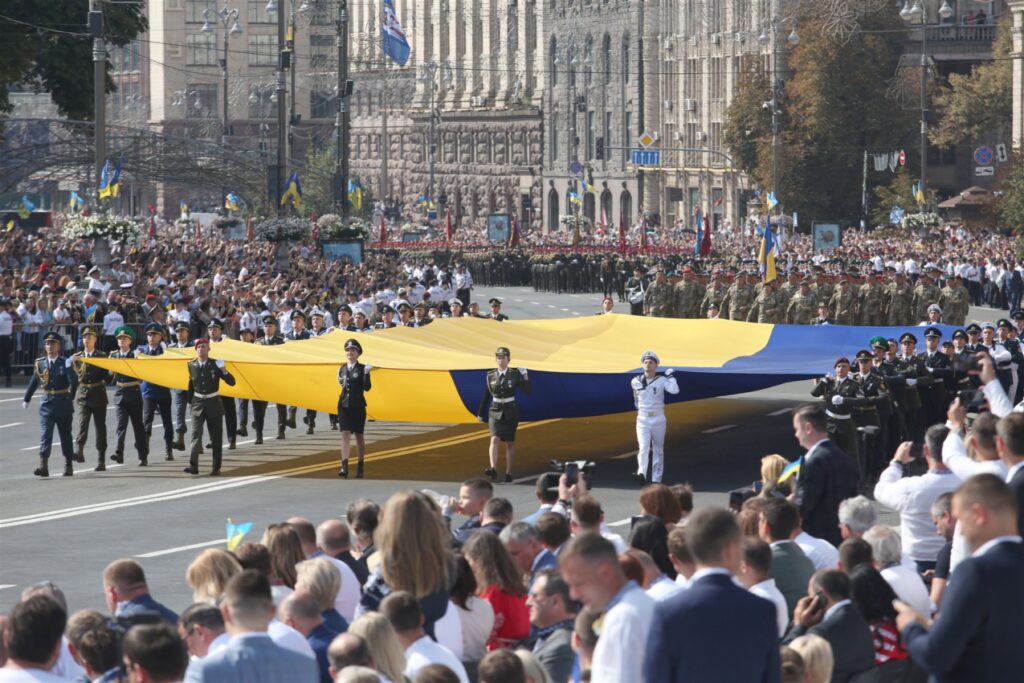 “On Independence Day we always watched the parade in town on TV. I didn’t realize then what it really meant.” The war has made Anya more aware of what her parents went through. “They then had to fight to break free from the Soviet Union, to be able to keep our own culture and language. Thanks to the previous generation, I can now speak Ukrainian.” Tomorrow there will be no parade in Kiev, but Independence Day is definitely celebrated by Ukrainians. “It has only become more important. Tomorrow I will celebrate it together with other refugee Ukrainians here in The Hague.”

Audience at matches between ADO Den Haag and NAC Breda

TV tip: the personal story of the first trans man at the Hague police