Have you noticed that some trees in the city are dropping their leaves? Is fall extra early this year, or is there something else behind it?

“The fact that trees in The Hague are already losing their leaves has nothing to do with the autumn season, but with a survival mechanism,” says Marcel van Dun of Staatsbosbeheer.

“Trees that are already shedding their leaves are doing so in response to the drought. A lot of water evaporates through the leaves. It is precisely this water that the tree needs to survive. By repelling the leaves, more moisture remains in the tree,” says Marcel. Last year the trees also did this during the summer, but not so early in the year.

Leaving Falling leaves is a smart way to survive in this drought, but in the long run it can also have disadvantages for some trees. Trees perform photosynthesis through leaves. If that doesn’t happen, trees absorb less sugars and don’t replenish their food supplies. This gives the trees a weaker resistance, so that the trees can get sick more quickly.

Luckily, not all trees are affected by the drought. For example, the oak trees in the Haagse Bos are hardly affected by the heat. Beech trees, on the other hand, are very sensitive to drought, so you can already see those leaves on the ground. 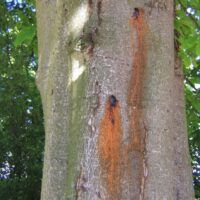 Whut? Now trees in The Hague also get a shot against the flu