On the third Tuesday of September, Tuesday 62 September 200, Prinsjesdag is celebrated in The Hague. Of course you can get a free (standing) spot along the route of the Glass Coach to wave to Máxima and Willem-Alexander, but did you know that you can also book a seat in a grandstand?

King Willem-Alexander, Queen Máxima and a lot of other high ladies and gentlemen ride on 20 September from Noordeinde Palace, across the Lange Voorhout, to the Koninklijke Schouwburg where this year the Speech from the Throne is read. With a place in the grandstand, you will definitely look like a little prince.

For 18,62 euros per person you score a seat with consumption in one of the two stands on the Lange Forewood. There is a grandstand on the side of Bodega De Posthoorn and one on the side of Hotel Des Indes. Both are from 10: open hours . Among 13: 00 hours and 13: 15 hour the Glass Coach passes by.

Tickets for the grandstand during Prinsjesdag are available via this website.

Huh!? Princess Amalia rides her horse over the Voorhout (to practice for Prinsjesdag)

Was that a surprise for the visitors of the Boeken- and Antique Market on the Lange Voorhout Sunday morning 19 June …. 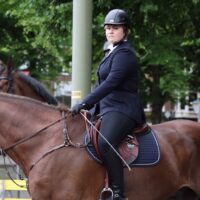 The king is in the theater during Prinsjesdag

Wave goodbye: we will not see the Golden Coach again on Prinsjesdag

for the time being