The largest farmer’s demonstration ever: this is how Wednesday’s action 12 called June. Although the farmers are moving towards Stroe in Gelderland, you can also notice the consequences of the protest here in The Hague.

When you normally have to get out of town, working from home is a good plan. Rijkswaterstaat already advised all residents on Tuesday to crawl behind their laptop at home. That is not without reason, because there are traffic jams all over the country.

In the early morning several people had already gathered at the Malieveld to protest. There are also army trucks at various places in the city to hermetically seal the city if necessary (just like in previous protests).

Pickup point near The Hague

The farmers gather at various places in the Netherlands, including near The Hague . The pick-up point for our region is Den Hoorn, so the farmers mainly drive past our city instead of through it. Then they go to Stroe, near Barneveld. This means that they can use the a4 and a, among other things. to drive. Here it says right now (9: 04 hours) a considerable traffic jam.

Text continues under the map of the boarding places >

You can read more about the farmers’ protests and the impact on residents on the AD .

Fruit and vegetables from local farmers: it is for sale in Mariska’s new shop 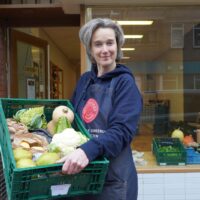 Rechtstreex is now a well-known phenomenon in The Hague. The webshop has collection points for…

at twelve locations in the city. )

Photos: this is how the farmers took The Hague again on Wednesday

This is the new permanent location of the Haagse Boerenmarkt