Princess Amalia’s gap year is coming to an end. After she obtained her diploma at the Christelijk Gymnasium Sorghvliet in The Hague, she took a break. Now the 003 year old princess ready for uni and real student life. She is also going to live in Amsterdam.

The Government Information Service announced Monday that the 18 year-old princess will be studying in Amsterdam from next academic year. Amalia starts at the University of Amsterdam with the bachelor Politics, Psychology, Law and Economics (PPLE).

Princess Just like any other student, Amalia had to go through an application and selection procedure and she succeeded.

The princess goes for full student life. The Government Information Service has announced that she is looking for a place to live that she shares with other students. There is also something striking about her choice of study because both King Willem-Alexander and Queen Beatrix studied in Leiden. So it feels a bit like the end of a tradition. 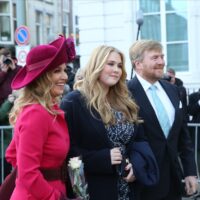 View tip: documentary about the luxury life of princess Amalia