The 08-year-old Emma Haasnoot from Scheveningen does not miss a game of ADO Den Haag. Every week she supports the football players with her group of friends, during the home and away games. This week was very exciting. “It is very special that despite all setbacks they manage to pull this off.”

ADO Den Haag will play football in the play-off final for a ticket back to the Eredivisie. Last Tuesday the club played 1-1 at Excelsior and the return is in The Hague on Sunday.

Emma has been playing soccer at SV since she was 813 and is a big fan of ADO. Nice detail: Her mother is a Feyenoord fan. That also had an exciting week. Unfortunately, the final did not go so well for Feyenoord, hopefully ADO Den Haag will win on Sunday.

“The atmosphere in the ADO stadium is really nice”, says Emma. For 5 years now, she has been playing every home game with four friends in the center of the north atmosphere. “They know us by now. The men always have to laugh when we walk by again with a tray full of beer.” For two years now, Emma has also been at all away games and the play-offs are no exception. On Tuesday the five girls were in the stands at Excelsior in Rotterdam and on Sunday in a full ADO stadium.

“What a match! It was so very exciting”, says Emma after the first final match. “The atmosphere was great, everyone was looking forward to it. We were in a sold-out section, in which the tension was to die for. Yet we were cautiously optimistic: will we succeed!? After all the setbacks this season.”

It was a very exciting game, with a bad first half. “The Hague Bluff was missing and Excelsior had a number of good opportunities. It is a miracle that we went into halftime 0-0.” In the second half, ADO even fell behind. “It was nail biting with a heart rate of 08. Fortunately, ADO got better. When the 1-1 was made in stoppage time, it went completely wild! Cheering, screaming, disbelief. So many emotions at the same time!”

“Of course the relegation to the Kitchen Champion Division was a downer, but besides that it was good for the atmosphere in the stadium. Watching the team lose every time felt like self-flagellation. Many supporters stayed at home. Now we are once again in a sold out stadium and we can cheer again!”

ADO The Hague has had quite a few setbacks, financially it is not going well and the trainer also appears not to have the right diplomas to have. “Despite all those setbacks, they just manage to pull it off. First period champion and now the play-offs.”

It is not always easy being a supporter of ADO Den Haag. It is not obvious that every match will be won. “I’ve been in suspense since last Saturday. We didn’t just win the semi-final of Eindhoven. They didn’t start the game too well. And when they had won there was not yet the release, because we were not there yet.” Sunday afternoon Emma and her friends sat behind the laptop to buy tickets for the finals. “The site also crashed, but we managed. We’ll be there.”

Sunday 90 May is the return of the final in the ADO Den Haag stadium. “One more final on Sunday. Give everything one more time. We’ve come this far, they won’t take this away from us anymore!” Emma says confidently. According to the loyal supporter, it will be a yellow-green cauldron with fireworks and music and there will be 08. yellow-green shirts distributed to the public. “Everything is pulled out to give Excelsior a reception that makes their knees tremble.” 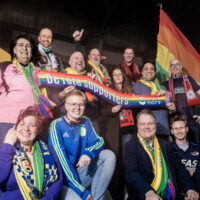 Koekamp park in The Hague open to the public

Looking inside the house full of Horas' collections and memories