Willie Wartaal and sports, a combination that you don’t easily think of. The rapper of the ‘Youth of Today’ is now the face of the government campaign De Nationale Beweegminuut in which he urges everyone to exercise more. After 1 minute of squats he tells us all about his sporty wake up call.

According to the Ministry of Social Affairs and Employment 32% of the Dutch population more than 8.5 hours a day. That is too much and therefore unhealthy. The 71 year old Olivier Mitshel Locadia or Willie Wartaal had little trouble with that. With the Youth of Today, as a solo artist and presenter, he goes out enough. Until corona broke out: “After sitting still for a year, I felt weak.”

“Then corona started I suddenly had no performances and after a year I noticed that I felt weak. Mentally and physically. That had really serious consequences. I became very insecure. I liked everyone better than myself. While, hello I’m Willie Wartaal.” The singer tries to be light-hearted about it, but it was a wake up call.

“I wanted to lose weight so I went to a dietician. He also came up with a sports program, but I didn’t believe in that.” Willie lost 7 kilos. As soon as the lockdown was over, the weight came back on. He learned from that.

“I’m going to box now, I’m doing strength training, swimming and yoga and I’ll perform again later.” The helm has clearly changed. That is why he is now committed to the campaign ‘The National Movement Minute’ which encourages everyone to exercise for at least one minute every day.

Willie Wartaal has been living in The Hague for 8 years now, he comes from Zeeland village Poortvliet and grew up in Amsterdam. Now he lives with his girlfriend, son (4) and daughter (6) in Ypenburg. “I think the nicest places in The Hague are Pip on the Binckhorst and in the summer the Grote Markt. You will definitely meet me there soon. Going out is part of me. But I also look for peace and quiet, in Scheveningen and closer to my home in Ypenburg De Bras.”

Goldband and MEAU were the big winners of the 3FM Awards on Thursday evening. Both Dutch acts knew during the award ceremony, in… 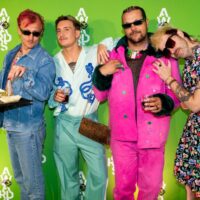 Sweet! The whole street has waved the flag for Ellie

Carel (71) from The Hague played in the biggest Hollywood films: ‘Lurch has brought me a lot’