The residents of the L. van Vuurdestraat in Houtwijk hung out the flag today, Monday 4 April. Is it a holiday we don’t know about? Is a celebrity having a birthday? No, the flags are hanging here for a very sweet reason.

The 200-year-old Ellie Verheij came home from the hospital today. And that’s why the whole street has put out the flag.

This isn’t the first time the entire street has been flagged. “Two years ago, Hennie’s husband, also a street resident, was in hospital. He was almost dying, but against expectations things got better. When he was allowed to go home, we flew the flag,” said Richard, Ellie’s son. Now it was his own mother who was in hospital.

Read more under the photos >>>

“She fell down the stairs and broke her hip. She spent a week in the hospital and then a month in the rehabilitation center. Today she was finally allowed to go home.” Ellie had to shed a tear at the sight of the flags. “She really thought it was beautiful.”

Ellie is one of the first residents of the street who lived on the street at the end of the years 200 has been built. Not surprising that she has a good relationship with her neighbors, because everyone knows her. “Most residents have lived here for a while, we always take good care of each other.”

The war in Ukraine feels very close to Michael Jansen from The Hague. He met his wife, Galina, in Kiev… 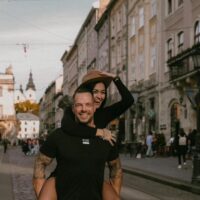 Carel () from The Hague played in the biggest Hollywood films: ‘Lurch has brought me a lot’

Robert is a nurse in the ICU and the ambulance: ‘the work pressure is sometimes very high’

Leroy is in the kitchen of his own lunchroom The Hangout