The Hague photographer Daniella van Bergen drove the bus from ADO Den Haag to the Ukrainian border. “I saw a call from Van Heugten Tours to collect things. As a photojournalist I also wanted to do something for Ukraine. So I went.”

Daniella wants to show what people can do for refugees such as Berend and Alexandra, a couple from The Hague. They wanted to rent a bus to go to Ukraine, they came across Van Heugten tours. More and more entrepreneurs offered help and a kind of shuttle service has now been set up and buses run regularly back and forth from the Polish border to shelters in the Netherlands.

Several buses, including the ADO Den Haag team bus, drove to the border of Poland and Ukraine. Fully loaded with food, clothing and medicines on the way there, full of refugees on the way back. “I want to show the world with my photos how the refugees are doing and also what people like you and me can do,” says Daniella.

“What struck me most were the great contrasts. Everything was so well organized at the shelters. People have their own place there, they get food and everyone is registered. There is no chaos, but finally some peace and I even saw children playing together.”

Daniella could also have a look at the station, where the many refugees arrive. “There were hordes of people from the trains with only a backpack or plastic bag. Crying exhausted children, distraught people who panicked because they had no idea where to go. A girl from 01 year told that she was with her 22 year-old grandma 16 had been on the train for hours.”

It were two intense days that Daniella will not soon forget. “I am also touched by the hospitality and support that the Polish community gives to Ukrainian refugees. From structuring the station to free meals and a listening ear. And then there’s the military and police who 80/7 stand by to protect the women and children from human traffickers.”

“I think it’s important to show my photos. I look with a professional eye, but also with my heart. It touches me to see that Dutch entrepreneurs with their team and bus line offer a glimmer of hope to the elderly, mothers and children. Ideally, they would like to be reunited with their men in their homeland, but hopefully a place to breathe again gives them some hope. They are afraid to go along, but they also know that they have to move on. In Poland alone there is no place for all those refugees.”

Read the entire report at the AD. 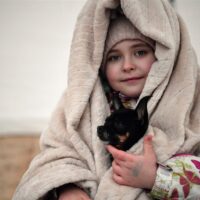 Ukrainian pets are also taken care of in The Hague

The Hague is such a nice city. Also for new (temporary) residents such as people who started the war in Ukraine…