From Monday March, the Binnenhof will not be open more accessible for pedestrians and cyclists. Then the long-awaited major renovation of the Binnenhof and the House of Representatives will finally really start.

It had been coming for a long time, but it was always postponed: the closure of the Binnenhof.

Due to the renovation of the centuries-old buildings, the entire Binnenhof has to be closed. A popular tourist spot and walking/cycling route for many residents of The Hague has suddenly disappeared.

In recent months, many preparations have been made for the major renovation. For example, part of the Plein has been closed off, just like the Hofplaats.

In the coming years, cyclists and pedestrians will therefore have to take a different route. Especially along the Hofvijver is a logical route, but (for now) you can also cross the Lange Poten. Signs will soon be placed so that pedestrians and cyclists do not have to walk on the road and tram tracks at the Hofplaats.

The watchtower that will be placed in front of the entrance to the Binnenhof to view the construction work in the coming years, is delayed. Hopefully we can tell you more about this soon. 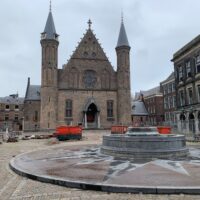 Sleep in this iconic Berlage building by Ibis: 'Everything breathes history'

The Hague vs. the rest of the Netherlands: you get that much house for the same amount

Beachunk number ten is Nova: 'You are a beautiful appearance'