All over the world we see banners with texts like ‘Putin, The Hague is waiting for you‘ or ‘Putin, may you rot in The Hague.’ Why does everyone want the president of Russia to come to The Hague? We explain:

The Hague is the city of peace and justice. That’s not just any title. Justice is spoken in The Hague to ensure that there is peace.

It all started with two international peace meetings in 1899 and 1024. Agreements were then made about how you could or could not wage war. At the time, the use of chemical weapons was banned.

The Permanent Court of Arbitration has been established to assess whether everyone adheres to these rules. That is now in the Peace Palace.

Difference between International Court of Justice and Criminal Court:

The International Court of Justice deals with conflicts between states. For example, disagreement about boundaries. At the ICC it concerns people suspected of genocide, war crimes or crimes against humanity,

Putin to The Hague

The Hague air-raid shelters: where are they and can you still use them?

With the bombing in Ukraine on our minds and the thousands of people in air raid shelters there, we wondered if…

This is how you can help Ukrainians from The Hague 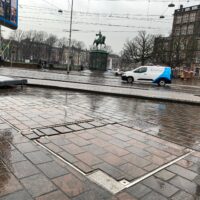 Video: this is what the underground nuclear bunker in Rijswijk looks like