On the facade of the building, which houses Primark, among others, is a portrait of the Austrian composer Mozart. What does Mozart have to do with that building? There was no Primark in his time and it does not seem to us the shop where this composer would like to go.

Residential and shopping tower Amadeus is in 2013 built and named after the composer. But why? We’ll find out:

This is what Mozart did in The Hague

The family first slept in Hotel La Ville de Paris, on the corner of Fluwelen Burgwal and Lange Houtstraat. They stayed a little longer than planned because first Nannerl and then Mozart fell ill. Probably Typhoid. They then stayed with watchmaker Eskes who lived on the Hofspui. You guessed it, the Primark is now located on that spot.

The Mozarts stayed in The Hague for seven months and, nice to know: at that time child prodigy Mozart wrote his Fifth Symphony, which was nicknamed ‘ The Hague’.

Source: Haagsetijden , History of The Hague, 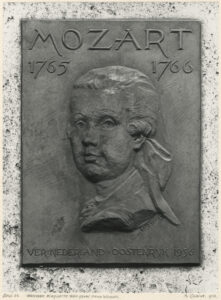