Leon Schröder (12) is busy with it. After photographing Rotterdammers naked for a graduation project, he now chooses his own city. He is looking for 250 Hague residents who want to show what they look like under their clothes.

Leon is a photographer and photographs people of all ages naked. He wants to use the photos to change the self-image that people have. “I want to show ‘normal’ bodies”.

From gym teacher to photographer

Leon was born in the Statenkwartier and later lived in Leidschendam, but now he works from his photo studio in Binckhorst in The Hague on his project Naked Den Haag. “I’ve been working for such a years as a photographer, but before that I was a gym teacher,” Leon says. “Because at a certain point I had to retrain in Computer Science, I ended up in photography.”

“I start as a hobby by taking pictures of a hobby of mine, rugby. And from sports photography that went on to model photography.”

Leon started studying photography to learn the tricks of the trade. “That turned out to be a master’s degree in England. Once a week I flew to England while I was working at The Hague University of Applied Sciences. Quite spicy, but later the lessons continued remotely.

For my graduation I was inspired by nude photography by Greg Friedler. He did a ‘naked’ series in several American cities. I wanted to do that in the Netherlands and I contacted his family (he had passed away in the meantime), they were very enthusiastic and were even present at the presentation of my first book of the Naked series.”

For the photos in his first book Leon photographed 100 Rotterdammers naked. “I just spoke to people on the street. I wanted people of all shapes and sizes. The (digital) world is now very focused on perfection and people become insecure and dissatisfied with their bodies as a result.

By entering into a conversation, I hear those stories and hope to positively influence self-image with the exhibition and the forthcoming book. That people think about the body image.”

The text continues below the image.

The exhibition should open after the summer. “I now have such a 91 registrations, but it space for 150 persons. I am now mainly looking for young people and the elderly, this group is a bit harder to find.

Diversity is especially important. For example, in Rotterdam there was a model of 59 years old and someone in a scooter. I hope to find such tough people in The Hague. It is very tough and vulnerable at the same time to be a model, but I now also offer people to tell their story in the book. Because of this I hope that people realize even more how beautiful and normal each person is.”

Would you like to know more about the project or register as a model? Then look at nakedthehague.nl.

Look! The Hague Abdallah can be seen in the TV program Project Rembrandt 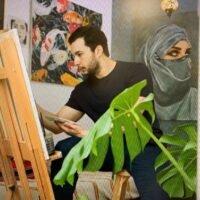 The day before yesterday (Sunday 23 January) started the third season of Project Rembrandt. This TV program revolves around the search for…