Soon there will be a new restaurant in The Hague. A new restaurant will be built on Zeestraat where Peruvian and Japanese food will be mixed. Everything at BlueBlood restaurant revolves around the lobster. And with the cocktail bar island in the middle of the restaurant, it’s like being on a ship.

BlueBlood is named after the lobster, because they have blue blood. The name of the luxury restaurant also refers to the royal touch of The Hague.

At the restaurant you can taste the Nikkei cuisine. For those who have never heard of it: these are Peruvian dishes prepared the Japanese way. A mix of two cuisines. The main dish at BlueBlood is lobster. Furthermore, there are also Tomahawk steak, fresh sushi and fresh vegetables on the menu.

The tables are set up in such a way that you can quickly start a conversation with other people. The menu was also conceived with that idea in mind. There are many dishes on the menu that you can share with others.

Restaurant BlueBlood you will soon find at Zeestraat . It won’t be long before they open the doors, BlueBlood expects in the spring of 2022 to open. 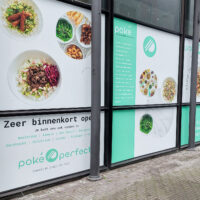 Yummy! This well-known poké bowl business will soon open in The Hague

The Hague will soon have a poké bowl business. You will soon also be able to go for a poké on the Turfmarkt…

This is how Napoleon influenced our lives