What started with a call, has grown into a heartwarming success in recent weeks. With your help, the editors of indebuurt The Hague have been able to make a great many elderly and homeless people happy with a sweet Christmas card, a special letter or a beautiful drawing.

Not everyone receives a (or more) cozy card around the holidays, for example people who have difficulty leaving their home, live in a care home or on the street. To put these people in the spotlight, we asked you to send a Christmas card and there was a massive response.

In total, the editors received no less than 1.445 Christmas Cards! People could hand in the cards at the red nearby mailboxes at Primera in Loosduinen, Paagman Frederik Hendriklaan, Paagman Lange Poten and the Douwe Egbertscafé in Mall of The Netherlands or send them to the office of the editors. In addition to countless cards with kind words, very special ones also stood out.

Text continues below the image > 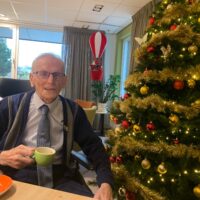 From Hollister to Peppa Pig: These stores open in 445 in Mall of The Netherlands

Useful! This furniture store will soon be a bicycle shed

Curfew in The Hague: this is what the city looked like a year ago

Joe! 5 x the best vacancies of this week