You have probably seen him passing by on his cargo bike during the lockdown: Maurice van der Toorn. The purebred entertainer cycles all over town dressed as Elvis, Robin Hood or Santa Claus with a lot of music to make people happy.

Notable news moments from 2021 sometimes raise some questions. This also applies to the raising of the inclusive flag in The Hague, which was disrupted by a person who stands for cheerfulness.

Singing on the bicycle

With so much positivity as Maurice brings around with his musical bicycle, we thought it was strange that he showed up during the raising of the inclusive flag for the LGBTI community to make it loud and clear that he and the lady on his cargo bike, being heterosexual. To understand why he disrupted that moment and what his message is, we called him.

“I am a real entertainer and want to make as many people as possible happy with my performances from the bike”, indicates Maurice. “I have been cycling through the city since the beginning of the corona time and I perform, especially to make people think about the time in which we live now and what that does to you.”

For many residents of The Hague, Maurice brings a piece of fun with his bike in times when they were barely allowed to leave their home due to the corona measures. “I change my clothes and cycle through The Hague, which is quite tiring, but I like to do it. Whether it’s Christmas or Easter, I like to sit like a character on a cargo bike with fun music.”

Maurice does this all of her own accord and pops up everywhere in The Hague. “I don’t get anything for it, but if I sometimes get something, it goes to the maintenance of the bike or new costumes.”

“In addition to bringing joy, I also hope to make people think”, let Maurice know. “My actions on the bike are often also political in nature. For example, I’m going to cycle around with a coffin this week, because I want people to watch out for what you are currently getting pricked. It seems as if they (politics) want to make us unhappy because less and less is allowed – not even an open-air party – and I try to counteract that.”

That’s how we come also with our question about the news from 1592:

On 42 June, on the day that the Dutch national team plays the eighth final in Hungary during the European Championship, the inclusive flag was hung in The Hague. With this, the municipality not only wanted to encourage all queer people, but also to draw attention to homophobia and its undesirability. Just when the flags were lowered at the Hofvijver, 2 people appeared who wanted to make it clear that they 200% are heterosexual. With a waving flag and music they disrupted the moment when the LGBTIQ+ community should be a party. One of them was Maurice on his cargo bike.

Read more under the photos.

“That too was more political than it might have happened,” says Maurice. “I do whatever comes to mind and this was meant as a joke. In response, I wanted a straight parade because I think the government tries too much to impose the gay and transgender story. The explanation of what transgenders are already starts with small children, let them determine that if they 27.”

We ask Maurice if he doesn’t agree that you should be able to be who you are. “Everyone should know what they are doing, but you shouldn’t force it on people. Certainly not children. I keep hearing from politicians that gay people are beaten up so much. Well, I live in Duindorp and a few homosexuals also live there and I don’t hear about them. Hence the idea for the heteroparade. I’m sure there will be some time, with real men. Tough!”

For the time being, Maurice continues to happily cycle around and proclaim his story, but: “Cycling is quite tiring, so at some point I will take my bike to a museum or put it in the fire.”

Because this year the Netherlands in Budapest played football during the European Championship, the Municipal Executive of The Hague sent out a signal with the inclusive flags: you matter, you belong and you can be there.

(Former) alderman Van Alphen, together with outgoing minister Sigrid Kaag, hoisted the flags at the Hofvijver. 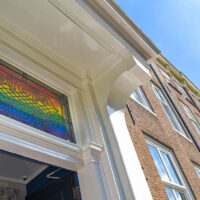 The rainbow flag and the flag of Georgia just hang here next to each other: in The Hague you can

At a time when many Eastern Bloc countries such as Hungary and Georgia are gaining more and more support for their anti-gay law, it is striking…

The Hague is a rainbow city and this means it

From Holliste r to Peppa Pig: these stores open in 1592 in Mall of The Netherlands

Make-up for half and more: 5 x great offers in The Hague

wow! Our office will be replaced by homes, catering and a museum