Since he was ten, Ian Smeyers has accompanied his grandfather Nelis to wash glasses. “My grandfather was a well-known figure in The Hague, he was also called the ‘opera singing window cleaner’, because he sang the most beautiful operas on his ladder”, says Ian proudly.

Even the then Queen Beatrix has a once stood at the bottom of grandpa Nelis’ ladder and listened in with admiration.

Ian runs Nelis Company, a socially committed window cleaning company in The Hague, he also operates the ‘Werkfabriek’, a coworking space at the Binckhorst.

Ian’s entire family, from uncles to cousins, has been in the window cleaning business for as long as he can remember. Born and raised in the Schilderswijk, he is happy to have outgrown ‘the misery of the Schilderswijk’. He can still identify well with the underprivileged boys he supervises. “I accompany boys from the street with a criminal record or because they are unemployed”. Ian jokingly calls the unemployed ‘Koekeloerders’: 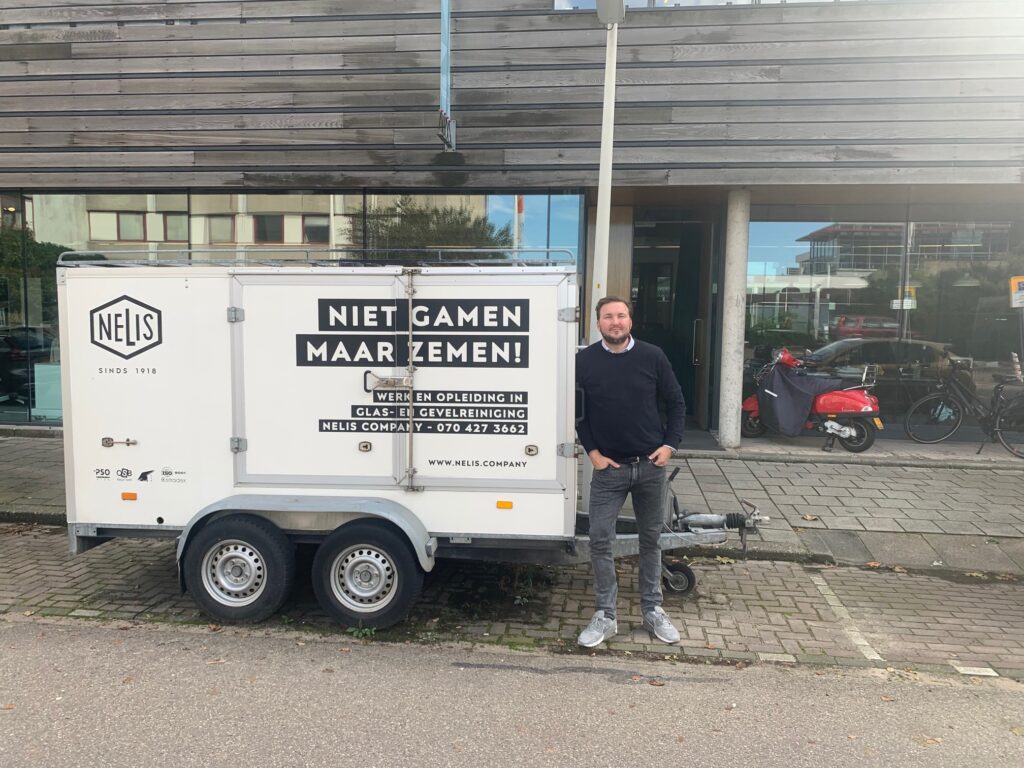 ) sitting and looking out: he spends all day peeping through the window

“Instead of looking through the window, they better wipe that window. In this way the young people learn to have structure, together with the necessary employee skills. Young people should not play games, but chafe”, he says.

In general, street boys have a good entrepreneurial mindset, says Ian. “They learn early on to manipulate on the street and to pretend to be bigger than they are, weakness is immediately punished on the street.”

Ian tries to turn these raw skills into something positive, by through coaching and intensive supervision. “Everyone gets a two-month trial placement and we match a young person with a tutor who helps them develop the skills they need in a professional work environment. They also obtain the necessary certificates during this period that they need to be able to grow further.”

A beautiful practical example is the year old Lionel, a boy who has been imprisoned for a serious offense and who operated in a street gang in The Hague. Ian: “This boy has the ambition to change his life. He always arrives on time, which is a good indication that he is motivated. He is a diamond in the rough, normally I no longer personally guide the young people, but for Lionel I made an exception.”

In addition to the fact that Lionel is gaining experience as a window cleaner, he also works in the Work factory. “In this way he works on his social skills in different environments and he meets people who want the best for him, which is very important”.

Noa’s company is called Haagsche Ka k: ‘Those turds are part of my job’

Call: tell the story behind your vintage pearl

Delicious! This is how you easily put a fresh and healthy meal on the table